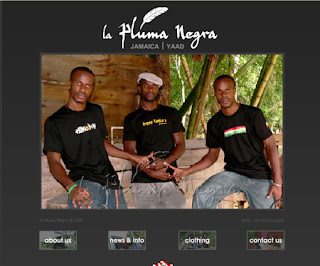 Kingston, Jamaica - Yeah we know we late, but thought I'd add it here anyway,especially as I sit writing this in one of their tshirts. Yep they back online and on track. run tings mi people. Check out la plumanegra clothing label.
Posted by US at 13:55 No comments:

A Tourist jumps into the Reggae Tshirts trade 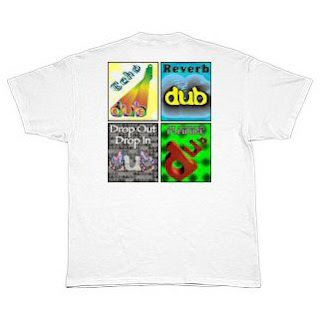 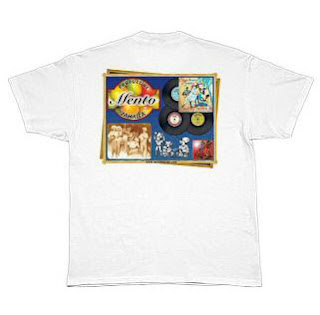 JAMROCK TEES INTERVIEW WITH MIKE'S REGGAE TSHIRTS
JT: Why did you get into the fashion / tshirt business?


Mike: I was disappointed in the tshirts I found when I first traveled to Jamaica. So much great music came from there, but there were no cool shirts celebrating that music, other than the Marley tshirts that can be found outside of JA. I began to design some reggae tshirts for myself to wear. With the internet, I was able to make these designs available to anyone else who might like them.

JT:What's the rationale behind the angle you took in the design and statements of the tees?

Mike:The statements are simple! The designs say I love reggae, or ska or mento or dub or rock steady or dance hall or all of the above!

JT:How long have you been doing this? 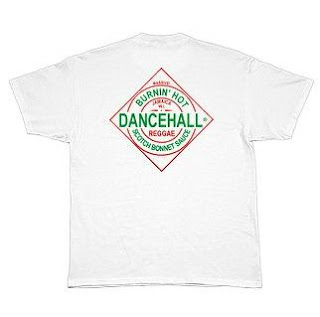 
Mike:If I divide the number of hours I spent creating the designs against my revenue, the numbers would make a business man cry! But I really don’t do this for profit. I did it to have some cool reggae shirts to wear. If a few other people buy some too, that’s cool!

JT:Define the typical buyer of your Tee?

JT:What are the top two achievement you are proud to share since being in this business?

Mike:First is making the first mento tshirts. Second, is that my first dub tshirt design came out great.

JT:What is the ultimate for you?

Mike:The ultimate for me is for everyone to love Jamaican music and enjoy it wearing a Mike’s Reggae Shirt!

From the mind of a Teenage Tee Mogul in the Making. 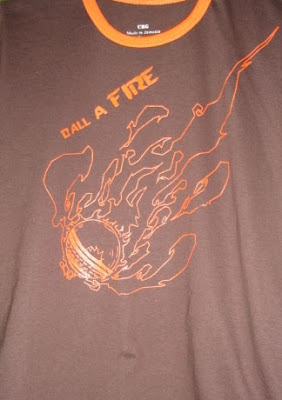 Our Interview with Peter John

JT: Why did you get into the fashion/t-shirt business?

PT:Because I didn’t want to invest in the ideas of others when I had ideas and philosophies of my own which I too want to express. And why not earn from my intellect through clothing.


JT:What’s the rationale behind the angle you took in the design and statements of the tees?

PJ: I want to express my attitudes towards the things happening around me daily, in a way that can provoke thoughts in others. I didn’t want to follow the same old sayings that are on every other shirt. I also wanted the shirts to have a vintage college look. For the Cricket Games to be held here I’ve used some old sayings as well as created my own but the graphics are all mine.


JT: How long have you been doing this?
PJ:For about eight months.

JT:Are you profitable?
PJ: Not at the exact moment, our shop (my mother’s and I) has only just been established, and most of our sales have been to family and friends, but we will soon begin an advertising campaign to attract new customers. However I did sell quite a few shirts before and with that money I have invested in launching my shirts on the wider market. Profitability is the potential not necessarily the outset.


JT:Define the typical buyer of your Tees?

PJ:y t-shirts appeal more to the conservative, alternative and intellectual groups of customers who want something that's simple, but still makes a statement that will make people say "where did you get that?" or "what does that mean?"


JT: What are the top two achievements you are proud to share since being in this business?

PJ:My two most significant achievements for me, within these past seven months, were my interviews with Fame FM, on live radio, and a front page spot in the Outlook magazine for my interview with the Sunday Gleaner’s Outlook magazine. I am only 15 (probable the youngest registered designer?) and having my own registered line of shirts has motivated me to continue the focus of excelling in life.


JT:What is the ultimate for you?

PJ:The ultimate for me s to be a renowned scientist with a great discovery but after Crysis Riot Gear® becomes a world renowned brand of shirts. The "likkle black yute" from the "likkle island called Jamaica" making it big, making my mom, my people and my country proud.

Tees that Text Back. 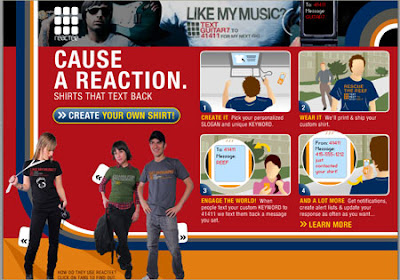 USA - T-shirts have long been conversation starters, letting their wearers express bold political views, support their favourite artist or display their quirky sense of humour. Reactee takes the interaction to another level by harnessing the power of text messaging, creating t-shirts that "text back".


How it works? A customer picks a personal slogan and a unique keyword, which Reactee prints on an American Apparel t-shirt. The user gets the t-shirt and flaunts it. Anyone interested in knowing more about the slogan or its wearer can text the keyword to 41411, and will get an immediate response as set by the wearer, who also receives a copy of the message including the sender's cellphone number. The response can be updated as often as the user likes, either at reactee.com or on the fly by cellphone. The shirts cost USD 20-27 depending on size and colour, and texting only works with US phones.


WHo's gonna bring dat to the Caribbean? 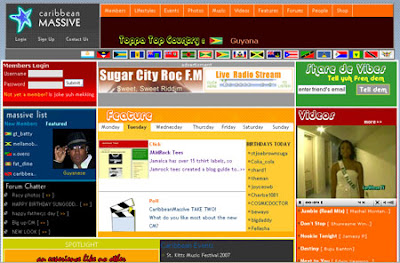 Kingston, Jamaica - Man, what a tonne of email to wade through. Mi granny! We're thankful tho. Well we're back to ride this badboy full tiem again afte exam and start another company(teezmobile.com) break.
Now we're back and what you can look out for, we're coming with two profiles for you by weekend, 876 apparel and a white dude outta Europe doing some wicked reggae inspired tees. Check wi back ppl.
But we thanks for the bless up on Caribbeanmassive.com who think we have front page appearance. Give thanks Rodney. Give thanks.
Posted by US at 08:27 No comments: 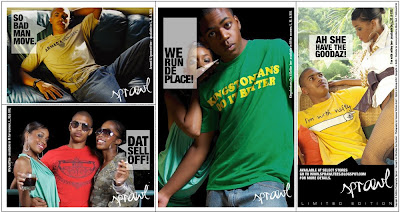 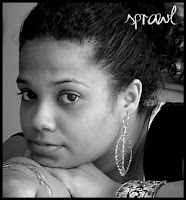 JAMROCK TEES SPEAKS TO SPRAWL'S FRONTWOMAN
Kesi Gardner: Sprawl is a distinct brand for a number of reasons.
1. It is a limited edition brand only 250 of any one design is printed.

2. The quality of the material is astounding in comparison to the other brands. It is made from a cotton poly blend,very soft to the touch, has a little stretch to it and the fit is custom designed.

3. The sayings are funny, witty and great conversation starters, they are Jamaican inspired but can easily be universal concepts.

4. Nothing is printed, without people's opinions, people are allowed to submit ideas, designs and/or vote for their fave tee and once the vote is submitted, it is tallyed and it will determine which designs are printed. The Threadless concept.

How did the idea for Sprawl come to you?
Kesi Gardner: The idea for the Sprawl t-shirt line was spawned in 2001 3 days after graduating Pratt Institute,NY. After playing around with countless ideas, but no funds to bring them to light, I returned home to Jamaican in 2002 and took a job in Advertising.
One day, I was watching a coworker design his own line of t-shirts and selling them to friends and family. I thought, "What the hell!! If he could do it i could do it too".

That name Sprawl?
Kesi Gardner: The name Sprawl comes from the Jamaican term "Sprawl out".Take off the "out" and it's just left as "Sprawl", which is a noun and a verb. Sprawl means to "tek it easy", but also "skin out", get wild and have a great time.

Who wears a Sprawl Tee?
Kesi Gardner: Sprawl is a lifestyle brand. It's for people who don't take themselves (and sometimes others) too seriously. It's for people who like to lounge, relax and have a good time. The ideas are driven by the whole message-tee phenomenon but with a Jamaican appeal. The great thing about this brand, is the uniqueness of the messages and how they reasonate with urban youth.

How has Sprawl been doing?
Kesi Gardner: The line is very young, it was launched officially in December at the members only boutique Stanley & Empress on Slipe Rd.

And Sprawl in 6 months?
Kesi Gardner: Sprawl is looking in the next 6 months, to have its tshirts on the North Coast and West Coast in hotels and tourist oriented shops.Marketing towards spring breakers and other vacationers who would like a souvenirs of their experience in Jamaica. We have intentions to expand with a line for women called Sprawl lyn, which will include baby tees and tank tops and a line for kids called Sprawl b, which will include nighties and cotton dresses and short sets.

Top three ways in which Sprawl has made you proud?
Kesi Gardner: The top 3 acheivenments have been: The response from people in theinternational market, who are excited about the product. It is said to be on par with designer tees in the US and UK market.

Secondly, Sprawl is a sponsor of Tuesday Night Live at the Village Cafe. Just being associated to this event has brought alot of attention to the brand. Heavyhitters of the event who wear the brand, include Robert Collins the owner of Village Cafe, Katherine, sultry singer, Cezar neo-soul performer, Wayne McGregor guitarist and Mystic Urchin himself.

There was a write up in the Gleaner, October 6, 2006. which showcased
Sprawl and the blog. The blog is important as it allows the viewer to
vote for their favorite tshirt and that determines which design will
be printed.
www.sprawltees.blogspot.com
Posted by US at 15:51 2 comments: 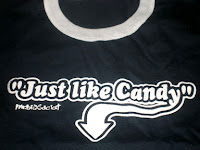 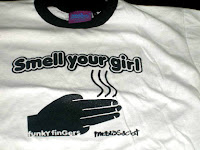 Kingston - What do you so when a woman comes up to you in Burger King on an early Saturday morning, hands you a card and stickers, and makes a pitch for her tshirt company that sells only on the web and will deliver to your door? You check out the site.notchilous.com

The tshirt company offers a limited edition, limited colours, limited sizes concept- they sell only 51 tshirts of a single design then retire it.

That name?
Rachel: Notchilous came from out of the 80's and was a word used to describe a don.Slangs such as Top Notch, Toppanaris and the more recent term toppa top have all come out of it. Therefore Notchilous means when you are the best at what you do.

When did Notchilous begin?
Rachel: We got the name NOTCHILOUS registered in December 2005. We actually started printing in October 2006 and the t-shirts became available online in November 2006.

Who do you want to wear your tees?
Rachel: Our buyers are those who are not afraid to express themselves through their tees.For example, a customer bought a tee that said "Will cause Diabetes." because he said he was too sweet, so he had to buy that tee. We print statements that you would love to say but can't, so we say it for you. Our ustomers are simply people who love to wear a good t-shirt and that ranges from teeni bopers to grandparents.

Future Plans?
Rachel:Our plans for 2007 is to expand and to continue bringing art to t-shirts and keeping it exclusive just for you. We will continue to print only a limited amount of each design to prevent "one bag of people with the same t-shirt." "It's not just a t-shirt thing it's a lifestyle." And everyone knows we are 100% Jamaican!!

For the Love of Jamaican tshirts

THIS blogsite celebrates Jamaican tshirts,tshirt artists and tshirt companies. EVERY FRIDAY we upload fresh interviews, news and pics and you can comment all you want.
WidgetBucks - Trend Watch - WidgetBucks.com

Words and pics to jamrocktees@gmail.com

-The Tshirt became publicly accepted as an outer item of clothing in the USA in 1955.

-The T-shirt became cool when James Dean wore it in the film Rebel Without A Cause.

-The idea of the T-shirt came to the during WWI when soldiers noticed the light cotton undershirts European soldiers were using while the soldiers sweated in their wool uniforms. -Now the Tshirt is more than just an item of clothing worldwide, they are a mobile billboard that makes the street into the world's biggest art gallery.